Leaving Bordeaux we headed for the coast, or to be strictly accurate we headed for the Bassin d’Arcachon which is a large, shallow bay pretty much due west of Bordeaux.  On the southern edge of the bay is the renowned Dune of Pilat (which may or may not be the biggest sand dune in the universe) and the town of Arcachon; however, our destination, Ares, is a small community on the bay’s north eastern edge, making its living from visitors and oysters and surrounded by pine forests.  We’d booked four nights at the La Cigale campsite, and with the temperature finally reaching 41 degrees for a couple of days we were glad that we’d chosen a site with a swimming pool, even though the pool surround was so hot that you couldn’t actually walk on it and in the absence of sufficient brollies we had to sit with our towels over our legs.

One of the features that drew us to the area is the network of excellent cycle paths that  provide access to the shores of the bay and to the wonderful beaches that line that part of the Atlantic coast – so on day three we girded our loins (I charged my battery) for the twenty-mile round trip to the beach.  Fortunately, much of the ride was in the shade and the only real danger was of being wiped out by other cycle path users – at one point we were overtaken by a lad on roller blades who must have been doing 20mph.  The beach, when we eventually got there, was awesome.  I have no idea exactly how big it is, but we could see at least four miles in each direction and it was virtually empty.  Surf was up, the sun was shining and not a ‘kiss me quick’ hat in sight.  Perfect. 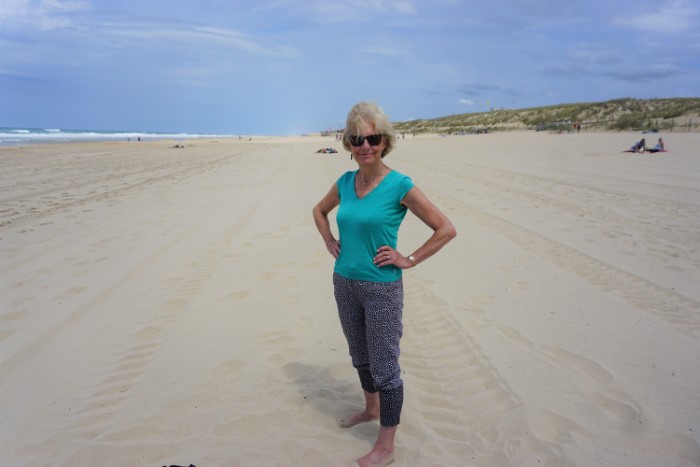 Our last two evenings in Ares were marked by seriously impressive thunderstorms, which are presumably a natural consequence of the high daytime temperatures we were experiencing.  Aside from sounding like someone was practising their tap-dance routine on the roof of the van, the storms didn’t really impact greatly upon us but, as you’ll learn in the next blog, they caused havoc elsewhere.