Starting our holiday in France, and with a couple of days to kill before the arrival of the family to spend a week with us in the villa we’ve booked at Saint-Cast le Guildo, we thought that we’d begin our trip on familiar territory by revisiting the Normandy town of Mortain that happens to be twinned with Blandford Forum and to which we paid a flying visit back in 2004 when I was Regimental Colonel.  To be honest I think that the only reason we were invited back then was because of my association with the Corps Band who’d been invited to perform at the town’s annual twinning celebrations.  Whatever the reason for the invitation, one of the few things I remember about that trip was that we were very well looked after by our hosts – even to extent of being accommodated at the home of Monsieur le Maire.   Why is it that our memories of some of these trips are so patchy?  Is it amnesia, dementia, or simply that we didn’t pay much attention at the time?

Anyway, for this visit I think that we expected to find the same lively and well-kept little French town- albeit without the bunting and jolly music.  Oh dear! How things can change in just a few years.  Sadly, the Mortain of 2022 is just like so many of the small, provincial French towns we’ve seen in recent years – dead, or well on the way towards an early death.  Empty shop fronts, ‘A Vendre’ signs on far too many residential properties and every indication of an imminent demise short of tumbleweed rolling down the main street.  The curse of the ‘out of town’ shopping centre has done for Mortain what the Romans did for Carthage. Tant Pis!

On a rather more positive note, one thing that Mortain does have going for it is an excellent ‘camperstop’ site  that allows visiting ‘vans’ to park overnight on the Place de la Chateau for free with the added amenity of a fully-automated, stainless steel public convenience which does just about everything for its clientele short of wiping their bottoms.  All very French.

After a leisurely start to Day Two, and having purchased and then consumed our first croissants of this trip, we drove the 30 or so miles to the pretty, bustling, and almost unspoilt town of Dinan which can boast some of the most original medieval streets and buildings to be found in this part of France.  Although the two towns are very different both in size and nature the contrast with Mortain couldn’t be more stark. 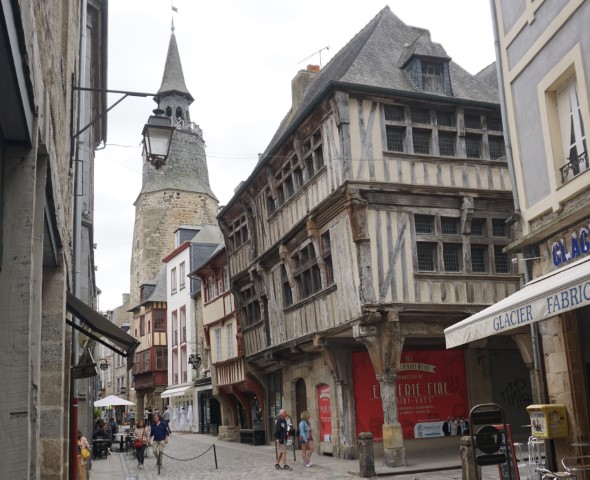 A further hour’s drive brought us to Saint Cast le Guildo, or at least as far as the rather dog-eared Pen Guin campsite on the edge of the town where we’re spending a couple of nights before occupying the villa.  In my official role as ‘campsite connoisseur’ I had little hesitation in awarding this one ‘null points’, partly because there isn’t a level pitch to be found anywhere on the site, but mainly because I was in a grump when we arrived!