Our last night in Ares was marked by yet another monster thunderstorm that was still making its presence felt as we packed up the van and went through the usual palaver of emptying the toilet and grey waste,  strapping the bikes on the back and getting ready for some high speed (80 kph) cruising.  The overnight thunder and lightning had been impressive (amplified of course by the fact that we were sleeping in a small plastic and aluminium box) but nothing to what they’d obviously experienced further inland.  As we drove through the area to the north of the Dordogne we started to notice some fallen branches and lots of debris on the road, and by the time we reached La Roche Chalais it was clear that a whole swathe of the countryside had taken a real hammering.  Just driving through towards Riberac we saw literally thousands of trees snapped, uprooted or with fallen branches, dozens of roofs destroyed, cars with smashed windscreens, entire crops of sunflowers, maize and vines battered to destruction by torrential rain, giant hailstones and typhoon strength winds – quite remarkable and a real disaster for the residents.  We had nothing to compare it with other than the typhoon that swept across the south of England in 1987.

Leaving the destruction behind, we stopped off at the idyllically pretty village of Bourdeilles which manages to cram the best part of a thousand years of history into a couple of hundred square metres and has managed to do so without turning itself into a tourist trap. No doubt it gets its share of visitors in the main holiday season, but we were thankful to be able to wander through with virtually nobody else in sight.  Hopefully the pictures speak for themselves.


Our overnight stopover in Brantome was another treat.  We walked from the camperstop up past the Abbey and through the pretty little town, which sits along the banks of the River Dronne, before treating ourselves to a feast of omelette and chips at a local restaurant – who says we don’t know how to live it up? 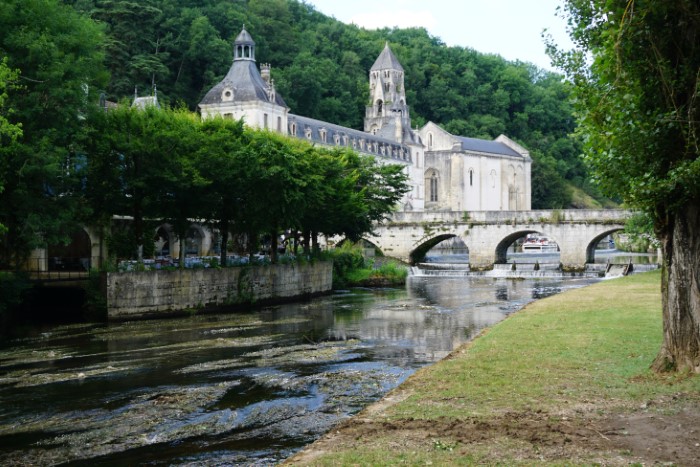