We’ve just returned from spending a few lovely days with the ‘Ewbanks of Nurnberg’  on what seems quite likely to have been our last trip to the Continent as true members of the European Community.  In years to come I’m quite sure that we’ll look back on this time and wonder to ourselves just how we (as a country) could have been so very stupid and short-sighted.  Still, nothing especially new there …. as a nation we seem to be experts at the stupid and short-sighted.

Germany is remarkable.  Whilst we should of course be wary of spending too much time looking back over our shoulders, you do have to wonder how over the past 70 years they’ve pulled themselves up by their collective bootstraps to become a rich and confident nation whilst Britain has become a faded, bitter and introspective laughing stock.  Still, mustn’t grumble eh?  That’s the spirit ….

It was great to be able to spend some time with the family and to see the twins getting stronger whilst Gretel develops into a bright and lively (to say nothing of determined) young lady.  No doubt they’ll all have a few more challenges along the way but at least Richard and Collette have a chance now to look up and see some light at the end of the tunnel – without wondering whether its a train approaching.

Nurnberg looked at its very best amongst the Christkindel celebrations and it was good to see large numbers of visitors enjoying Europe at its best.  Not like …… still, better not start that again. 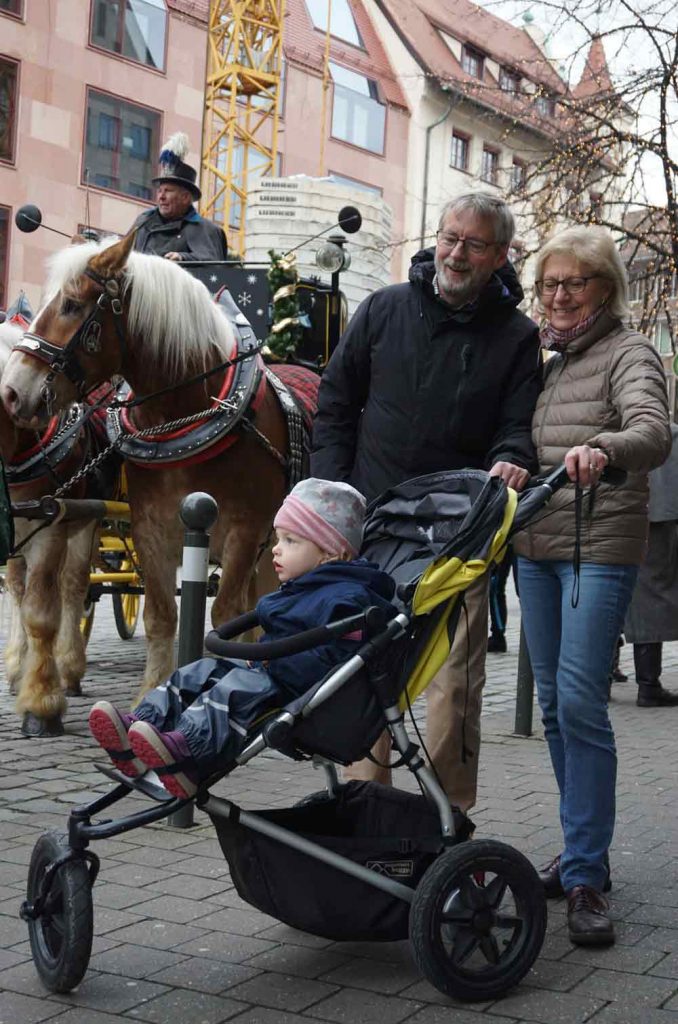 Our recent visit to the family in Nurnberg just happened to coincide with the Christkindlesmarkt which is both a bad thing and a good thing. On the one hand the city is full and so accommodation is at a premium, and on the other hand it’s a perfect excuse for drinking gluhwein and eating bratwurst!

Our  apartment was in the city centre, which isn’t really the sort of place you’d expect to find riding stables, but these two intrepid riders managed to catch a quick ride on a passing pony! 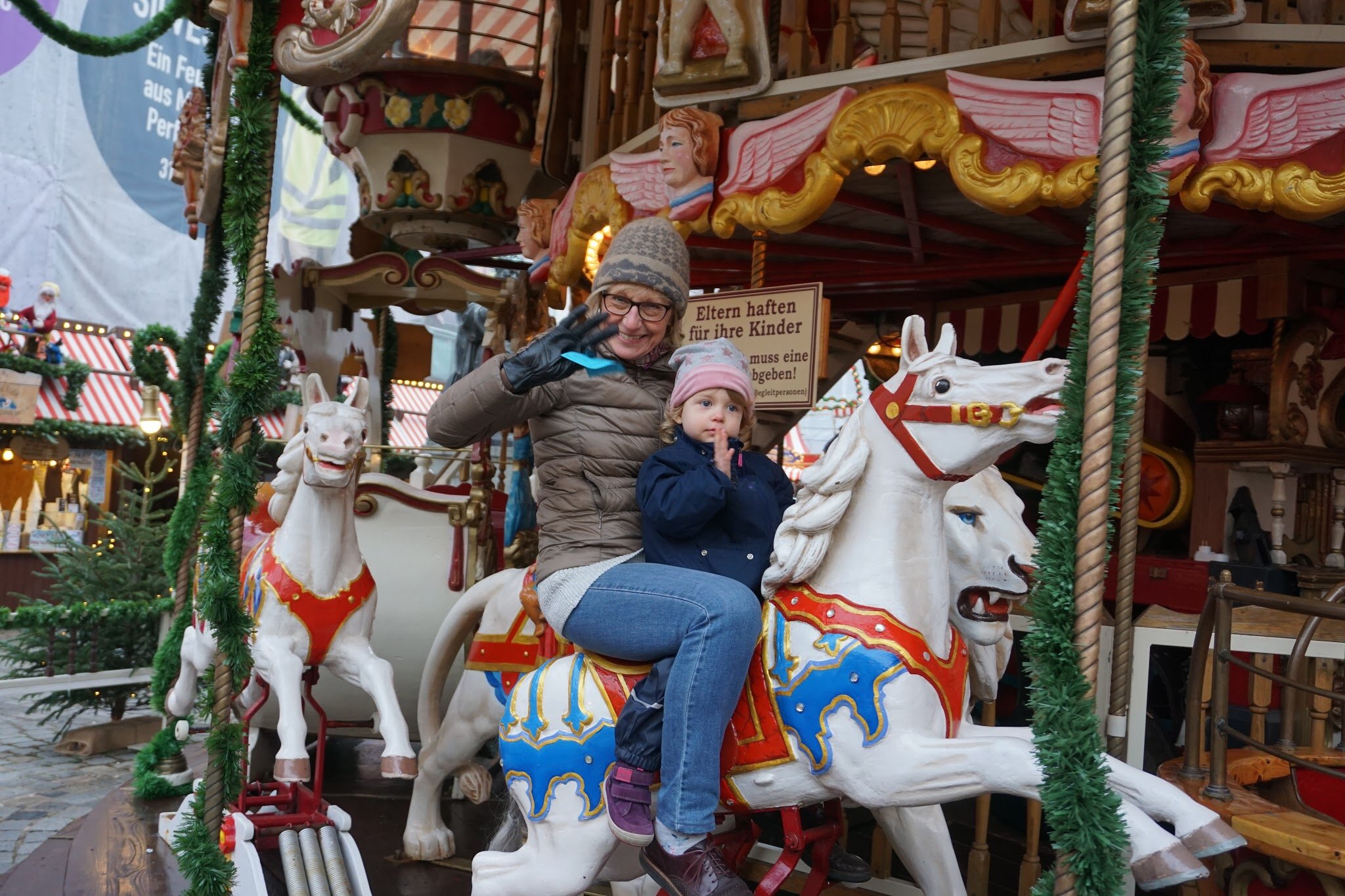 Our visit to Nürnberg at the tail end of September came just a couple of weeks after we’d learned that Richard and Collette had been busy again and were expecting the arrival of identical twins  in early April next year.  Who says ‘lightning never strikes twice’?  By the time of our visit I think that we’d all more or less got over the initial shock, so it was great to spend a little time with them congratulating them on their exciting news and hearing their plans.  It was also wonderful to have a few days with Gretel who unsurprisingly seems to change and grow with every week that passes.

For this visit we used Airbnb to book a very nice room in Weilandstraβe which is no more than10 minutes gentle stroll from Richard and Collette’s apartment.  We didn’t see a great deal of our hostess, Karin Wittenstein, but she made us very welcome and the room was comfortable and relatively inexpensive, so in all likelihood we’ll use it again for future visits. Once again we struck lucky with the weather and had an opportunity to do a bit more exploring around Nürnberg, including a fascinating visit to the building in which the war crimes trials were conducted in the aftermath of WW2.  Courtroom 600 and the associated visitor centre provided an excellent and well-balanced insight into the history of the Nazi era, the accused, the trials themselves and the social and political environment in which they were held.

On the Saturday we decided to venture a little further afield and, in company with Richard and Gretel, we let the train take the strain for the hour-long journey to Bayreuth.  On the way Denise enjoyed a long and detailed  conversation with the German lady who she sat next to – a great opportunity to practise her language skills but quite what they spoke about I don’t think even Denise is entirely sure.

Bayreuth itself is a quiet and elegant city and well worth a visit.  As we sat in the main concourse enjoying our lunch I was reminded of our life in Germany nearly 40 years ago.  When all’s said and done things haven’t changed so very much – the beer and sausages still taste good! The past nine months have been a tad difficult – not least when it came to sitting down and attempting to write an interesting, entertaining or informative blog. In August of last year I started to feel unwell and by the time I had been diagnosed with kidney disease towards the end of 2016 I was well and truly under the weather and largely ‘confined to barracks’ with little prospect of having anything interesting to write about.

These days the media seldom seems to have much that’s good to say about the NHS, however I have to say that my personal experience has been pretty much wholly positive. No doubt I’ve been fortunate to live in a part of the country where the service doesn’t seem to be permanently overloaded and in crisis, however being able to get to see my GP at virtually no notice and most importantly being able to rely upon the services of the experienced, caring and highly professional staff of Gloucester and Cheltenham hospitals has made the overall experience of being ill vastly more bearable than it might otherwise have been. I am immensely grateful for their help and support but, at the risk of seeming ungrateful, hope to be seeing rather less of them in the year to come.

Anyway, enough of all that! The good news is that as I hopefully near the end of my initial treatment (the wonderfully named Ponticelli Regimen) I seem to be making good progress and have at last been able to get back towards living a more normal existence, enjoying some of those things that I’ve been looking forward to over the past few months.

The first and most important news to report is the arrival of our first granddaughter, Gretel Lilly Ewbank, who came into this world in Nürnberg on 23rd February 2017 courtesy of her parents Richard and Collette. She’s a beauty and a delight and no doubt will one day be a famous scientist, renowned artist or perhaps even a skilled restorer of classic cars. Who cares just so long as she remains healthy and happy?

On the automotive front I have to report that Bertie has moved on to pastures new. Although we thoroughly enjoyed our relatively short period of Austin ownership it became increasingly clear over the past year that he was just one car too many for us and that we would have few opportunities to gain full use or enjoyment from him going forward. The good news is that he’s moved on to enthusiastic new owners and that for the first time in 47 years of automotive ownership I’ve actually managed to make a small profit from buying and selling a car!

Nature abhors a vacuum and the prospect of having a little spare space on the drive was obviously insufficient reason for not going out and buying another vehicle (not sure that sentence makes sense, but you know what I mean) so we immediately went out and bought a motorhome – what else? Our first short expedition to the north Devon coast in early May was an unqualified success so as I sit here tapping away at the keyboard we’re actually parked in a field in Powys at the start of a six day break which, if all goes well and the weather stays reasonable, should see us exploring the Welsh coastline and getting to know our new mode of transport. Today Welshpool, tomorrow the world – we’re on the road again!

It may have taken Richard a little while to get around to popping the question to Collette, but it seemed to take no time at all for the big day to come around.  With Jennie and Nathan’s Yorkshire event still fresh in our minds we were really looking forward to celebrating this second family wedding in the course of only nine months.  The fact that this time we’d be doing so in the Bavarian Alps made the prospect even more exciting.

The Duftbrau Gasthaus was a wonderful setting for a wedding – mountains, forests, wild flowers, donkeys and excellent beer, what more could anyone want?  The pictures tell the story ………. Well, the great day came at last and Nathan and Jennie have now tied the knot!  A September wedding in Yorkshire was always going to be of a bit of a gamble with the weather – and celebrating the event in a tent (sorry, a Papakata tepee) in a field on the edge of the North Yorkshire Moors was definitely pushing their luck – but fortune favours the brave and I’m glad to say that we were blessed with sunny skies and the only water to be seen was bottled and on the tables. Beautiful bride, handsome groom, glamorous bridesmaids, lovely setting, great weather and surrounded throughout the weekend by family and friends – what more could we have asked for?  Well, we could have asked for a Hip-Hop DJ session provided by Richard and Tom – but we got that anyway!  All part of our musical education I suppose.