Leaving the lovely Peak District we wound our way through Macclesfield (site of one of the Ewbank ancestral homes) back towards the motorway and started the long flog north.  Despite a headwind of about 300mph we had good weather and relatively light traffic – both of which helped to make it a pleasant journey.

As we were now a couple of days ahead of our original timetable we needed to find a stopover without straying too far off the motorway – after a bit of head scratching we remembered that about four years ago we’d overnighted at Hoddom Castle Campsite which is just over the border near Lockerbie and, despite the site being rather busier than we’d expected, they managed to squeeze us in for the night.  It’s a nice site, but we wondered quite what visitors from overseas would make of their spelling! 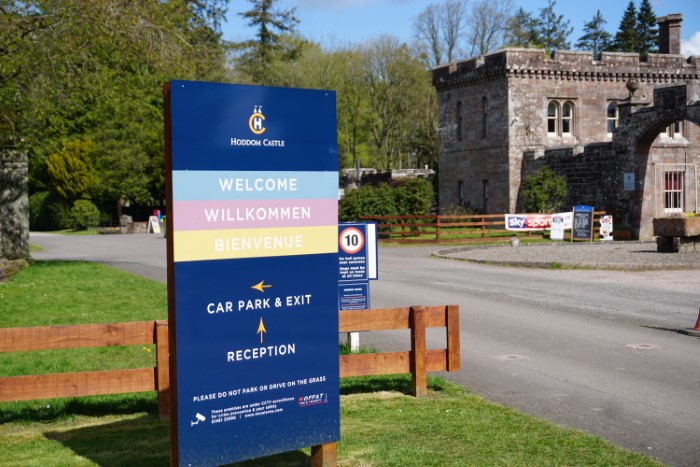 A short morning walk from the campsite up to the nearby Repentance Tower provided a more than adequate supply of fresh air and good views of the Solway Firth, both of which set us up for the next leg of the journey up to Luss on the western shore of Loch Lomond.  As we were still a day ahead of our schedule we were again fortunate that the campsite managed to fit us in for the extra day.

Luss is a pretty’model’ village, built early in the nineteenth century by the local Colquhoun family (who apparently own some 75,000 acres on the western side of the loch) for their workers in the local slate quaries; nice at this quiet time of year but I imagine it must get absolutely rammed during the tourist season.  The following day we cycled the 8 miles along the loch-side up to Tarbert – which I’m afraid to say had absolutely nothing to recommend it!